After the 100th time checking the weather or looking up transit times before heading out the door in the morning, I came to the realization that having a tablet mounted near my front door with relevant information would be useful. In anticipation of venturing outdoors more regularly in a post-vaccine world, I decided to build a personal dashboard as my pandemic project.

There is a good deal of prior art in this space, from the Magic Mirror Raspberry-Pi-deployed dashboard intended to be embedded in a DIY mirror, to customizable iPad apps that have all the common personal dashboard features out-of-the-box. For my part, I wanted to balance the customizability of a DIY project with the lightweight-ness of a solution that runs entirely on a tablet. I specifically wanted to customize the particular APIs used, including some less common sources like local transit times. Though I make no claims to being a frontend developer, I expect it is uncontroversial to say that a backend-less SPA is among the more lightweight options in the web application space. And my go-to for building frontend applications is ClojureScript.

This series of posts will walk through the creation of cockpit, the ClojureScript SPA I now have mounted on my wall. Before getting to specifics, let’s look at the final dashboard: 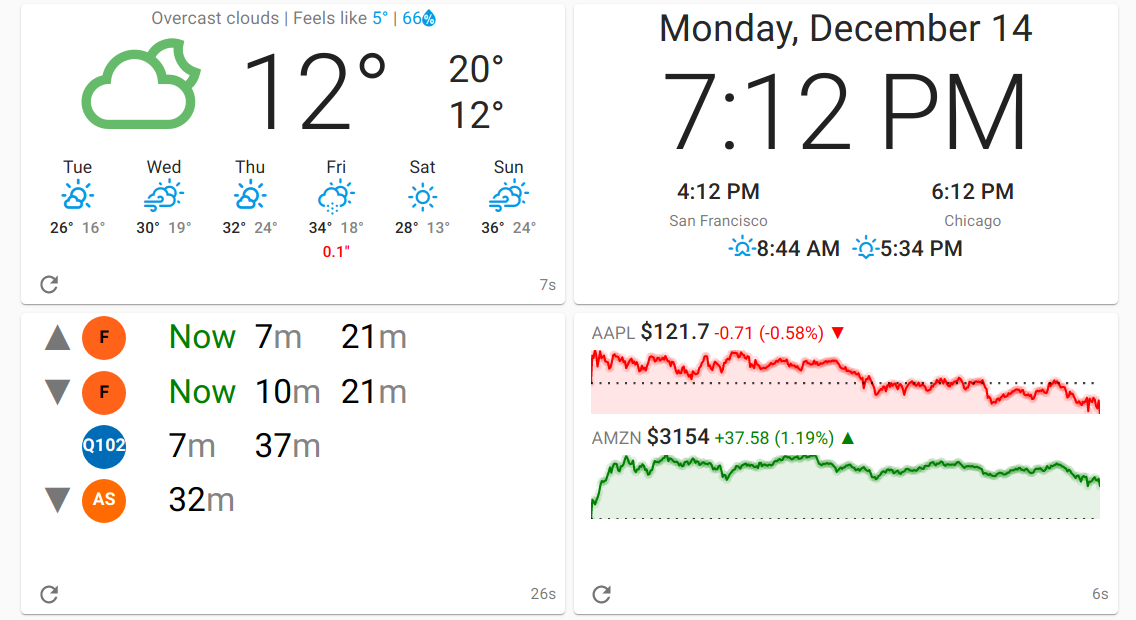 There are loads more details that go into a card–each is effectively its own mini application. This post will primarily cover the skeleton of the dashboard and the bare-bones clock card; I’ll aspirationally follow-up with future posts to explore the other cards in the dashboard.

In the ClojureScript SPA space, there are several stand-out React wrappers vying for dominance. For this project, I chose re-frame since the learning curve for a small-scale project was lighter than Fulcro. Rather than wire all the various libraries, build tools, and debugging utilities together manually, the re-frame-template makes it easy to get started. This

is basically how I seeded the repo. The biggest opinion imposed in the template aside from re-frame itself is shadow-cljs as the build tool.

With a skeleton project in hand, let’s wire up the views. Dipping our toes into Material UI requires adding it as a dependency to src/cljs/deps.edn:

which will instruct shadow-cljs to fetch the dependencies through npm during the build.

The src/cljs/<project>/views.cljs file is where the “Hello World” main-panel lives. Thanks to the magic of shadow-cljs, we can require the React components directly into the cockpit.views namespace as if they were native ClojureScript code:

With this in place, we can modify the main-panel with our Material UI Grid components:

The :> shorthand adapts React components into Reagent components. weather, clock, transit, and stocks are functions that define the contents of each card. This gives us a blank slate to fill in our cards with content. 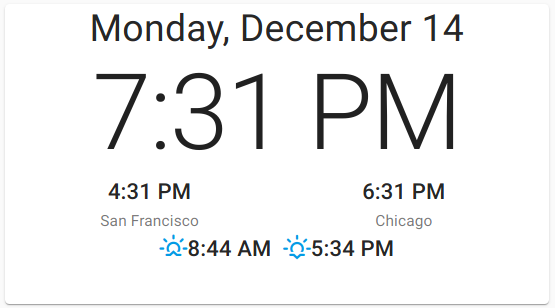 The clock card consists of a header with the date, the current local time, a side-by-side view of the time in the US Central and Pacific time zones, and the sunrise/sunset times.

which makes liberal use of the Typography Material-UI component along with a nested Grid component to show the ET/CT timezones side-by-side. The only missing pieces are some minor styling to fix the height of the Card so it fills the containing Grid.

Nested within the React components that make up the clock view are re-frame/subscribe functions which bind the view to re-frame subscriptions which are, effectively, listeners for re-frame events. Subscriptions and events are commonly defined in src/cljs/<project>/events.cljs. The clock events and subscriptions for the main time display are comparatively simple:

Subscriptions and events in re-frame are a complex topic, so this treatment will only begin to scratch the surface. In short, the ::timer event–when triggered–will update the :clock key in the application’s db state hash-map. The ::clock subscription defined with reg-sub is a “Layer 2” extractor subscription that does nothing but pluck the :clock key back out of the application db. The ::time subscription is a “Layer 3” materialized view of this extracted value (the :<- [::clock] adds the subscription dependency), converting it to a string that is ready to be inserted into the rendered view. Internally, re-frame chains these subscriptions into a graph, updating all the Layer 2 subscriptions when the db changes, and then updates only the changed Layer 3 subscriptions and their subscribed views, leaving everything else untouched.

The remaining subscriptions are left as an exercise to the reader with spoilers available (isolated to a dedicated namespace) in the clock.cljs file in the source.

To tie things together, we must continually trigger the ::timer event for our clock to receive updates and subsequently be re-rendered in the view. For this, we turn to re-pollsive, a library that lets us trigger events based on a fixed time interval. After adding the library dependency to the project.clj file, we initialize it in the src/cljs/<project>/core.cljs file to continually send the ::timer event:

An :interval of 1 will update our clock every second.

With all this in place, a lein dev will build and begin serving the application from localhost:8280, complete with hot-reloading to make iterating and tweaking the app seamless.

The next post in this series will dive into the Weather card, which involves our first external API calls.